Making Practical Use of Aerial Imagery

As a part of Langhorne Creek’s ‘Resourcing Growers for the Future’ project supported by Wine Australia, we’ve been looking at how remotely sensed imagery can be practically used by growers, viticulturists, and wine makers, and where they are seeing the value.

We had region wide imagery taken by a cessna just before vintage 2019, and in the last year imagery from space is now at a per vine resolution of less than 1 metre. Alongside significantly reduced costs, region wide coverage, and multiple imagery captures in the growing season, aerial vigour imagery is now a more affordable and useful digital tool for our industry this coming season. 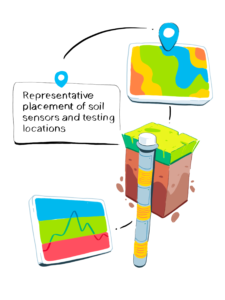 Imagery can be used to identify a vineyard’s average areas. This facilitates the placement of soil moisture sensors, and assists when taking soil or plant tissue samples for testing. For example with George Dridan at Integrated Precision Viticulture “In terms of the optimal placement of soil moisture sensors, I use aerial vigour imagery to locate the most representative zone of the vineyard, and install them there so that growers are irrigating to the majority of their block”

Imagery can be used to highlight areas of significant variability. Growers are using tools such as Platfarm to create prescription maps showing where on their blocks remediation work needs to be done. Once out in the block Platfarm acts like a sat nav, telling the user when to start and stop work, or change rate — making targeted mulching, strategic ripping, and variable rate spreading much less hassle. “We’ve used high resolution vigour imagery for the past 3 seasons, and we’ve been pulling it into Platfarm and using it to direct the targeted application of Mulch, and also drive variable rate compost spreading. This has enabled us to significantly extend the number of blocks that we’ve been able to cover within our budget” Ben Lacey, Grape Grower, Lacey Viticulture

Imagery can be used to identify the areas of vineyards that are really struggling. Digging soil pits in these zones, along with targeted soil testing, allows growers to get a better understanding of what the limiting factors are, so they can create effective management plans. Matt Wilson, Viticultural Consultant at DJ’S Growers has been doing just this, and “rather than growers ‘throwing darts in the dark’ when it comes to trying to rectify problem areas within vineyards, we used satellite NDVI imagery with Paul Roberts in Langhorne Creek to identify where differing zones were. We then dug soil pits and targeted chemical and physical soil analysis on those locations, in order to get to the bullseye of the issue”

Imagery can be used to highlight irrigation issues. Whether it’s blue patches that may indicate leaks, or areas of low vigour which can point towards design problems such as low flow rates, finding problems is the first step towards solving them. As Jenny Venus, Senior Viticulturist at Brad Case Contracting describes; “we could clearly see where we were suffering from irrigation design problems, with insufficient flow getting to the end of certain rows – we’ve been able to focus on these issues over the winter and improve overall water use efficiency.”

As imagery capture becomes more frequent, with turn-around times often below 48 hours, growers like CMV Farms and Angove Family Winemakers have been able to use crop stress and thermal imagery to inform their in-season decision making, such as irrigation scheduling. “We’ve had Ceres Imaging flying over our vineyards throughout the growing season, and their crop stress imagery helps us to make timely and valuable decisions and corrections to our irrigation scheduling” Nick Bakkum Viticulture Manager, Angove Family Winemakers

Imagery can be used to identify areas of the vineyard to target wines for vintage. Viticulture Managers such as Nick Bakkum at Angove Family Winemakers are using change detection software at key times between captures in their Grade A blocks to make corrections in the vineyard to get a better harvest result. Ben Pridham at Pridham Viticulture in McLaren Vale is also at the forefront of using imagery with his clients like Nick Bourke, the winemaker at Hugh Hamiltons “During vintage we shared images with Nick, so that he could easily see the vigour differences in blocks, giving him the option to harvest A Grade sections at the optimum time”

The imagery providers that are covering Langhorne Creek are:

You can also get imagery via: